How can I display a long checkbox item caption on multiple lines? Print

Sometimes when working with checkbox groups you may have one or more elements that require a long caption to convey the appropriate information to the users that will be making selections.  The default behavior of the checkbox group items is to display the defined caption in a single line of text.  If you have a long caption, this could potentially run off the edge of your form page:

Fortunately, with a little adjusting of the checkbox group, there is a way to allow for proper display of long captions on multiple lines.

The first step is to put the desired caption into an appropriate number of labels that are sized with the width desired to fit in your available space:

Now that you have your caption put into multiple labels of the appropriate size, you will need to hide the caption for the second item in the checkbox group.  This can be done in the properties dialog for the checkbox item by unselecting the checkbox that indicates whether the caption should be displayed: 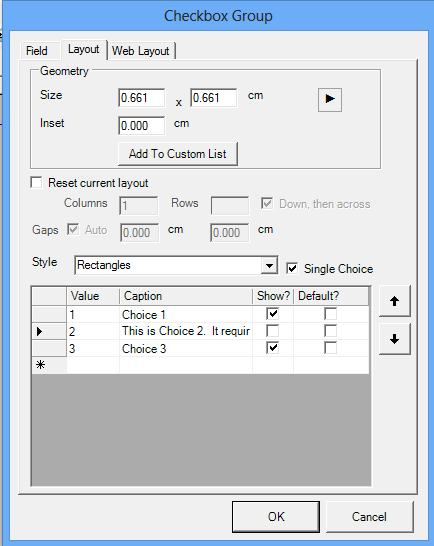 Now the checkbox group does not display the caption for the second item:

Now you can reposition your labels containing the caption you want to use so that they are next to the second checkbox item.  However, as you'll quickly notice, there is not enough room to have the two lines of text without overlapping into the caption for Choice 3:

Never fear!  You can manually change the spacing between the checkbox items to allow enough room for the two rows of caption necessary for choice 2.  In the Designer, hold down the Alt key on they keyboard and click on the checkbox group.  This will select each of the individual elements in the checkbox group:

Each of the elements can now be individually repositioned.  Hole down the Shift key and click on the elements that you do not want to reposition, in this case, that would be the elements for the first and second item.  Only the checkbox and caption for the third item need to be moved.  So with those items still selected, move them down far enough to allow the caption for the second item to be displayed without overlapping:

Once you have the elements positioned as desired, click on the form page to unselect the checkbox elements and allow them to be re-grouped again.  Now, you have a customized checkbox group layout that allows for a multiple-line item caption: