Reports consist of PDF files that have been uploaded and assigned to a form using the NextGen Designer (NGD). From the Reports tab in NGD, form field values can be overlaid atop the PDF in order to generate a "completed" Report PDF when the form is submitted/finished by the Mi-Apps client. Reports can also be generated in HTML format directly on the Mi-Apps client, allowing them to be viewed or printed in the app even while offline.

Starting with version 12.0 of the Mobile Impact Platform, Reports can be scripted to generate customized page content. In this article we will walk through an example of how to use this feature to bind the contents of a Grid, which may have an indefinite number of rows, onto a report.

Consider the following form example in which breed information is entered and then collected onto a grid named "Breeds on Premises." 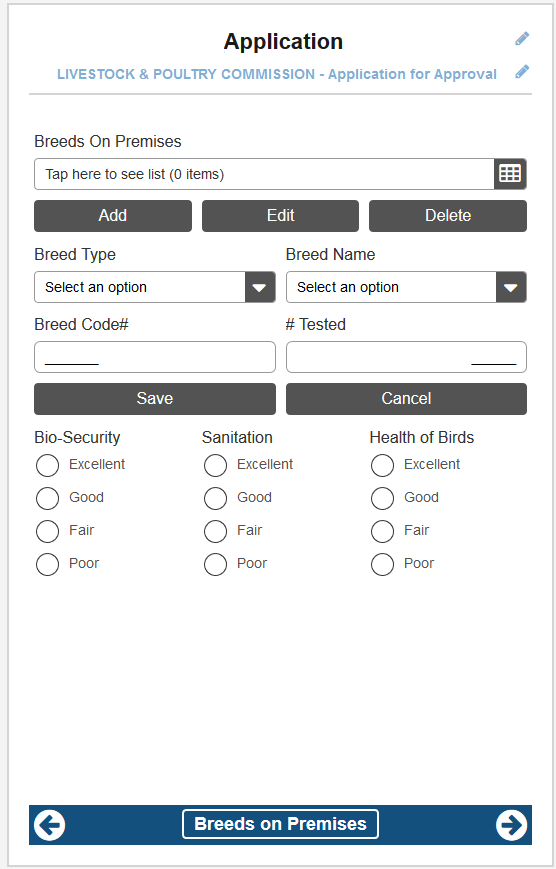 Each row of the BreedsOnPremises grid represents one breed entry and will be display as a table row in the form's Report. (Note that the additional form field bindings - Bio-Security, Sanitation, Health of Birds - may be ignored for the purpose of this example.) 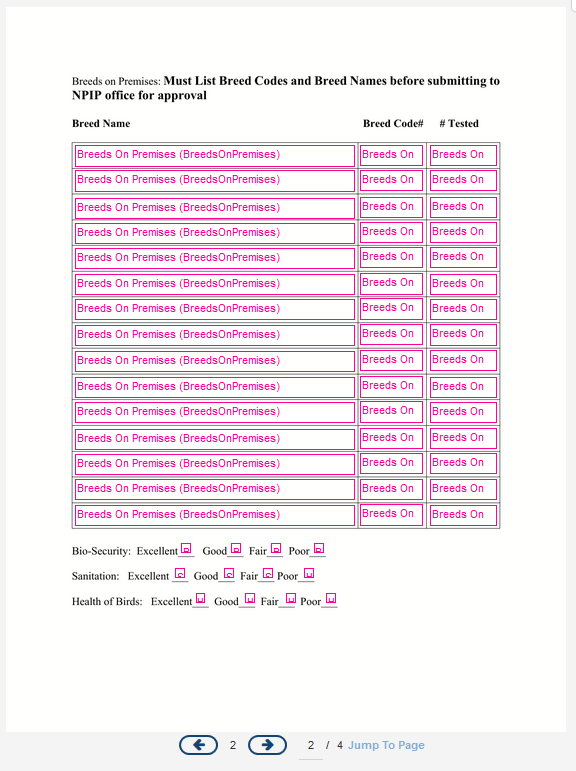 Each cell binding is configured on the Binding Properties panel with a row and column value corresponding to the source grid.

In this way, the report will contain a table of data that mirrors the contents of the grid.

The report can be generated in client script using _form.generateReportHTML() which will return an HTML representation of the completed form. In the code shown below, the report HTML is generated and then displayed in a popup window.

Note: the _form.platform.isWeb() method is used to indicate whether the script code is running on a mobile device or in a web browser. In the case of a web browser, _form.platform.isWeb() is true and a new browser window is created. In the case of a mobile device, it is false and the report HTML can be printed directly using the built-in _form method.

To further extend the form's capabilities, let's examine the custom report generation feature. You may have noticed that in this example so far we are limited to displaying up to the maximum number of rows contained in the Report's table (in this case, 15). If our form's grid contains more than 15 items, we won't see them all because we have only created bindings for 15 rows. Since the report PDF is a static page, we cannot grow the printed table to accommodate more items.

In the example shown below, some additional parameters are sent to _form.generateReportHTML:

The callback method specified by beforeBindingRendered receives a single JSON object as an input parameter.

The fields of this JSON object are defined as follows:

Example: suppose the form script calls _form.generateReportHTML with a pageList of [1,2,3,2,4,2]. For a field that is bound to each page on the report, the callback function will be called six times (once per generated page) with the following values for callbackParams:

Spanning a grid across multiple pages

A few notes about this code:

In this example we are generating three pages as a fixed report length. This was done for simplicity, however in a typical scenario the number of generated pages will depend on the contents of the grid. To do this, the value of pageList sent to generateReportHTML will need to be dynamically generated.